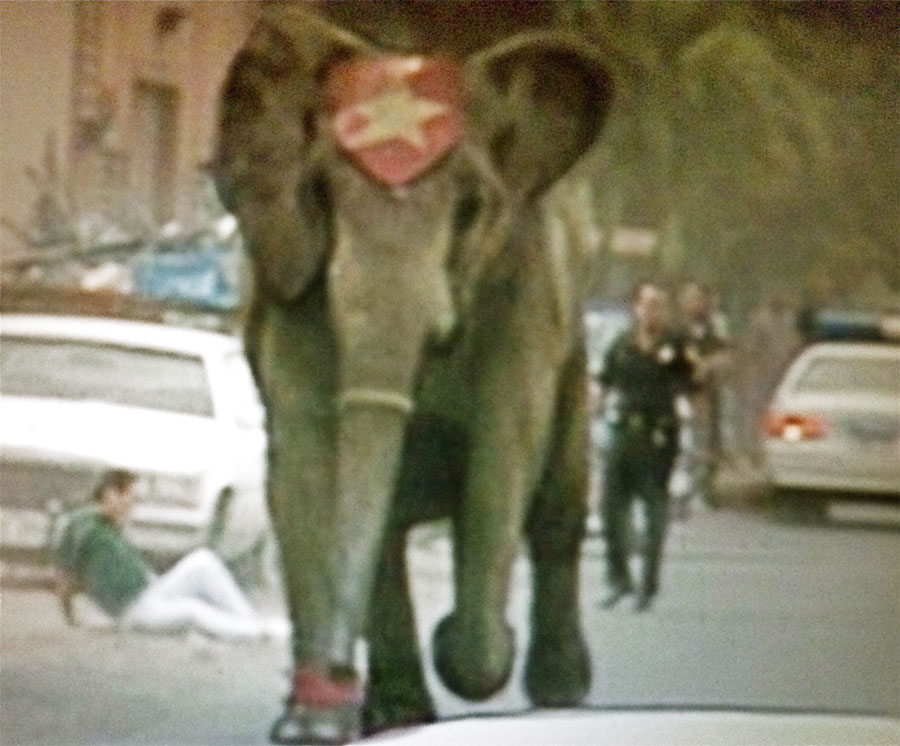 This is the gripping and emotionally charged story of Tyke, a circus elephant who went on a rampage in Honolulu in 1994, killed her trainer in front of thousands of spectators and died in a hail of gunfire.

Her break for freedom – filmed from start to tragic end – traumatised a city and ignited a global battle over the use of animals in the entertainment industry.  Looking at what made Tyke snap, the film goes back to meet the people who knew her and were affected by her death – former trainers and handlers, circus industry insiders, witnesses to her rampage, and animal rights activists for whom Tyke became a global rallying cry.

Like the classic animal rebellion film King Kong, Tyke is the central protagonist in a tragic but redemptive drama that combines trauma, outrage, insight and compassion.   Ultimately, this moving documentary raises fundamental questions about our deep and mysterious connection to other species.

Stefan Moore is a producer/director and executive producer of documentaries in the USA, Britain and Australia.  His documentaries have received four Emmys and numerous other awards.  Recent films he has directed include Mysteries of the Human Voice (2012) for Nat Geo and Arte, Honeybee Blues (2009) about the world’s disappearing honeybees (Sydney Morning Herald TV Critics’ award for ‘Best Australian Documentary of the Year’), The Cars That Ate China (2008) about China’s car revolution (Dendy Awards nominee at Sydney Film Festival), and the National Geographic TV special Race Against the Killer Flu (2007).  From 2001-5, Stefan was the Executive Producer of Science and History at the Australian Broadcasting Corporation and prior to that he was an Executive Producer at Film Australia where he commissioned critically acclaimed documentaries and series such as Dennis O’Rourke’s controversial Cunnamulla, Facing the Music and Bush Mechanics.  As co-director of TVG Productions in New York, he produced and directed award-winning documentaries including the 8-part PBS/BBC/ABC series The Trouble with Medicine, Trouble on Fashion Avenue about organized crime in New York’s garment industry, Presumed Innocent about pre-trial detention at New York’s infamous Rikers Island, and The Irish Tapes which is now part of the Donnell Library permanent collection at the Museum of Modern Art.  Stefan was an artist-in-residence at WNET’s TV Lab in New York and is a Guggenheim Fellow.

Susan Lambert’s award-winning film and television work has been broadcast and distributed in Australia and internationally.  Her experimental documentary feature Landslides (1990) was screened theatrically in Australia and her feature film Talk was released theatrically in both in Australia and USA in 1995.  Susan’s work includes the critically acclaimed observational television series Under the Hammer (ABC), Risky Business (SBS), and DIY Law and Love and Money (both for ABC).  In 2001 her controversial Tokyo Bound: Bondage Mistresses of Japan was broadcast on Channel 4 in the UK and SBS.  In 2004 Lambert directed Deadly Enemies for ABC and Channel 5 (UK).  In 2006 her documentary The Good, The Bad and The Ugg Boot was one of the highest rating programs in the ABC’s history. In 2007 Lambert co-produced The Cars That Ate China, a co-production between ABC, NDR Germany, CICC China, Electric Sky UK and Jumping Dog Productions. She has recently directed episodes of two major ABC series: The Making of Modern Australia and the landmark observational courtroom series On Trial.  In 2011 she produced the award winning docu-drama Recipe For Murder, a top-rating Australian documentary for ABC. Recently she directed episodes of Outback Coroner for the History Channel and My Big Fat Bar Mitzvah for ABC. Susan’s films have been screened in major international film festivals including London, Toronto, Chicago, Seattle, New York, Cannes, Oberhausen, San Francisco, Edinburgh, Tynside, Sydney, Melbourne, Perth and Brisbane.

Megan McMurchy has produced documentaries, feature films and television series over a career of thirty years, working both independently and as a contract producer.  Megan’s award-winning documentary productions include Tony Ayres’ Sadness for SBS and Catriona Mckenzie’s Mr Patterns for ABC (both awarded ‘Best Documentary’ by the Film Critics Circle of Australia), as well as Remembering Rain and Mystique Of The Pearl.  She co-produced the landmark feature-length documentary For Love Or Money and the feature portrait of Professor Fred Hollows, For All the World to See, both of which were released theatrically in Australia.  As Executive Producer at Film Australia, Megan commissioned major documentaries including Tom Zubrycki’s The Diplomat and innovative works such as China Dolls.  Megan produced the series Fine Line, Hybrid Life and New Horizons for SBS and was series producer of Hoodlum’s 13-part multi-platform interactive drama series Fat Cow Motel for ABC and Austar.  Working across both factual and drama, Megan has produced or executive-produced over 50 hours of television.  She has also produced the feature films Footy Legends, Talk and Breathing Under Water, as well as a number of short dramas.  Megan has mentored a number of emerging producers and has served as a director on the boards of Film Australia and the New South Wales Film and Television Office (now Screen NSW).  She was manager of Screen Australia’s Enterprise Program during 2009-11 and recently produced the 10-part web series I Luv U But.

Jumping Dog Productions is a producer of award-winning and critically acclaimed documentaries for Australian and international audiences.  Founded by filmmaker Susan Lambert in 2000, Jumping Dog has produced a range of films and series including some of the most highly rated programs in Australian television history. Jumping Dog documentary topics include social issues, culture, science, history and the law.

Since its inception, Jumping Dog Productions has developed strong working relationships with broadcasters, production companies and distributors in Australia, Europe, the US and Asia, and we continue to build affiliations with a range of international partners.

Stray Dog Pictures Pty Ltd has become the production arm of the company.